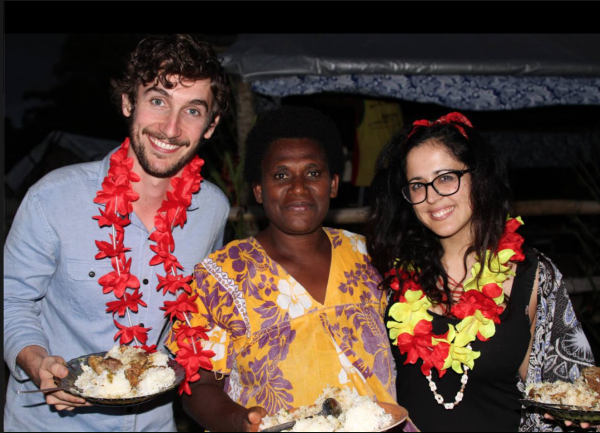 On Friday June 3, Carlton based charity Co-Ground will launch their month long crowdfunding campaign to raise $40,000 for an innovative social enterprise aimed at helping end poverty.

The charity want to use coffee to make a difference and open a mobile cafe with 100% of the profits supporting the cause, an idea thought up by Co-Ground Director Andrew Mellody. The campaign target covers all the infrastructure costs of the project, including equipment and the van itself.

“What if by drinking coffee you could help change the world? We believe in social enterprise, and we want every coffee you buy to help kick-start education in the developing world,” he said.

All coin generated from the cafe will go towards supporting Co-Ground’s education and livelihood programs in the Asia Pacific region. The charity currently works with eight villages in Vanuatu, which was ravaged by Cyclone Pam in March 2015.

Andrew had family living on the island at the time and set up Co-Ground in response to the natural disaster, the worst in Vanuatu’s history.

“We decided it might be better to work directly with communities through Andrew’s contacts and find out exactly what they needed, what they wanted and make sure every dollar went to the communities themselves,” said Nicole Precel, who co-founded Co-Ground with Andrew and another friend, Aleksei Plinte.

The charity works specifically with Sara Primary School, and has spent considerable time fixing, upgrading and cyclone proofing the school. Later this year Andrew and Nicole will be travelling to Vanuatu to assist with the building of a third classroom and library.

Co-Ground is run entirely by volunteers, which now number 30, and partners with businesses who believe in their cause, allowing for minimal overheads.

“We’re really very careful with money and how we spend it. I think that’s one thing a lot of people are concerned about when it comes to charities, that a lot money goes to administration or advertising or overheads and that’s something that we really don’t have,” explained Nicole.

Five Senses Coffee, an Australian coffee wholesaler with roasteries in Perth and Melbourne, will be donating a full supply of coffee to the mobile cafe, as well as providing extensive training for all team members at their Australian Barista Academy.

The crowdfunding campaign will kick off with a fundraiser at Thousand Pound Bend, 361 Little Lonsdale Street, on June 3. Starting at 7.30pm, the event will feature performances by Myami, Masco Sound System, Headstone and Motel Diablo DJ’s, along with some very special guest appearances.

A 24 hour live celebrity stunt will be happening concurrently with the event, the details of which are being kept under wraps until the launch of the campaign.

Nicole and Andrew would like to encourage everyone to support the campaign and help them reach their target, even if that’s just by getting down to the launch party. Social media challenges will also be taking place throughout the month so there are plenty of ways to get involved.

“We really see education as a vehicle to keep people out of poverty, which is why it’s one of our focuses. Come party with a purpose and make a difference by having a rad time!”

For more information, visit www.co-ground.org or follow @Co-Ground. Tickets for the launch party are available from co-ground.eventbrite.com.au, or cost $20 on the door.