The politics of identity 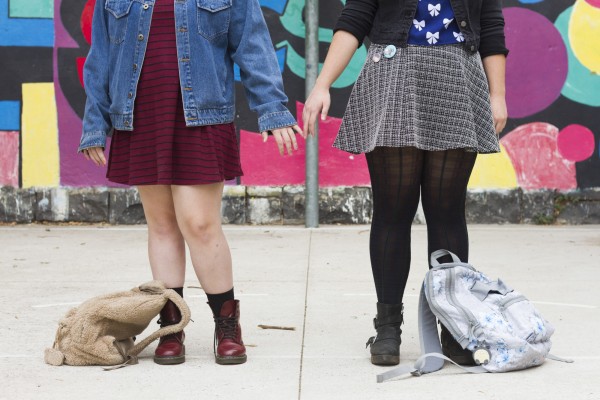 The politics of identity

According to the 2010 report Writing Themselves In 3, 61% of young people who identify as same sex attracted or gender questioning have experienced verbal abuse on account of their sexuality.

The report is the third in a series of national studies conducted by La Trobe University’s Australian Research Centre in Sex, Health and Society, examining the sexual health and wellbeing of LGBTIQ Australians between the ages of 14 and 21.

Eighteen percent of the study’s 3134 participants also reported homophobic physical abuse. Alarmingly, 80% of those abused indicated that school was the most likely place for abuse to occur.

Many participants shared distressing instances of bullying and abuse.

“I was getting books out of my bag for my next two classes, when these two girls walked past me about 4 metres away to get their books. If they didn’t call me a fag, I probably wouldn’t have taken any notice, but as I went to walk down the concrete stairs to my class the two girls ‘tripped’ and pushed me down the stairs and onto the concrete or at the bottom. I had a blood nose, split lip and mild concussion. The two girls stood at the top of the stairs and laughed until they noticed a teacher coming their way. They got no punishment because the teacher believed their story about it being an accident.” (Lucy, 15)

The Foundation for Young Australians (FYA) and Gay and Lesbian Health Victoria formed the Safe Schools Coalition Victoria in 2010 as a way to tackle homophobia in schools and reduce bullying by creating more inclusive and supportive school environments.

The program was later rolled out nationwide and now operates as a national coalition of organisations and schools, offering a range of training options and resources designed to help staff and students respond to homophobic behaviour and implement school practices that celebrate diversity.

Brunswick’s Sydney Road Community School is among 535 member schools. The government secondary school joined the coalition several years ago at the suggestion of their school nurse.

“Our membership is a statement that we celebrate diversity and want to support anyone who might be targeted because of their difference. Many of our students have stated that they are really proud to know that our school is a member and we have a low incidence of bullying events of this nature,” said Ralph Gotlib, the school’s Acting Principal.

Safe Schools in the news

The Safe Schools program recently came under fire from backbench Coalition MPs, who raised concerns about the age appropriateness of some of its material with Prime Minister Malcolm Turnbull during a partyroom meeting.

Turnbull ordered a review into the program on February 23, however Coalition MPs were outraged when University of Western Australia academic professor Bill Louden largely gave the initiative the green light.

The backbenchers slammed the review as a “joke,” saying that the Professor Louden was given very limited scope and just two weeks to examine the program.

A petition calling for a parliamentary inquiry into the program was circulated on March 16, which was reportedly signed by 43 of the 81 backbenchers, including former Prime Minister Tony Abbott.

On March 18, Education Minister Simon Birmingham stated that, in response to the review, several sections of the program would be redesigned and all references to external links, except mental health support services, would be removed. The program would also be restricted to secondary schools and require schools to obtain parental consent.

Janet Rice, Greens Senator for Victoria, is appalled that political tensions may have caused the government to question the value of the program.

“It’s not about the issues in terms of supporting LGBTIQ young people, it’s about this political wedge between the two factions of the liberal party. I find it really harmful and hurtful that they are willing to use the lives of Australians in order to achieve their political ends,” she said.”

The Australian Christian Lobby have been one of the most vocal groups in the media, arguing that the Safe School resources are confusing for children and based on radical theories rather than fact.

“It is not appropriate for the wallpaper of our children’s lives to be continually sexual. We are in danger of having students believe that the most important thing in life is to have sex,” spokesperson Wendy Francis commented.

Francis explained that there are anti-bullying programs already in place, which offer support to all students experiencing abuse.

“Bullying in general is a problem in schools, but it is recognised and tackled. Most children who identify as LGBTIQ face bullying and this is a problem. Also bullied are children who are overweight, who have a disability, who are female, who are smart or not smart, who are religious or from a different race. I believe these are all problems in our schools.”

“Although generalist anti-bullying straggles have their role to play, it is clear from statistics that homophobia is a specific issue with particular contributing factors, and in order to effectively address this, we need to be able to have an open and transparent conversation about the particular issue at hand, and its particular triggers and causes,” Evers said.

In 2015, Merri Health and YGLAM partnered with the Safe Schools Coalition Victoria to deliver You’re Not Alone, an interactive theatre piece for secondary school students that looked at the challenges faced by same sex attracted and gender diverse young people at school.

Gotlib wants Safe Schools critics to understand that the program is about promoting acceptance and ensuring that all young people feel valued and respected.

“It’s not about sex. It’s about supporting students to feel ok about being themselves. This is one of the most important messages a young person can receive. Otherwise the impacts can be devastating,” he said.

“It’s impossible to know real stories of young people who have felt the effects [of homophobia] without feeling impelled to support them.”

William McAndrew is a student at Sydney Road Community School and believes that the program only reinforces the school’s already welcoming atmosphere.

“I think having the reassurance that the school is part of the Safe Schools Coalition is really important for new students to feel safe and happy,” he said.

He expressed his frustration with the government’s actions and concern for the health and wellbeing of those affected by the issue.

“It’s almost like they’re bullying the diverse students, kicking them when they’re already down because they’re the easiest target. It’s really scary to think what’s going through those students’ heads at the moment and that politicians are throwing away those lives because they’re not informing themselves properly.”

“I don’t think learning about sex is going to make someone more sexually committed. They’re just going to be informed so they can make the right decisions when the time comes,” she said.

Opening up the conversation

After a discussion in February with friends, Cecilia Devlin and Ruth Horsfall formed the Safe Schools Story Project (SSSP), a narrative-based, personalised series of testimonials from all sections of Melbourne’s LGBTIQ community.

They were angry about the investigation into the Safe Schools program and the coverage of the issue and wanted to create a safe space for LGBTIQ voices to be heard.

“We asked people to tell us what the Safe Schools program meant to them- either as a reflection on the lack of support they received during adolescence, a positive appraisal of the program’s operation at their own school, or a show of endorsement for its continuation,” Devlin said.

Stories continue to be posted and demonstrate varying degrees of the suffering and isolation experienced by many LGBTIQ Australians.

“I can’t remember my time in high school – I choose not to remember it. For me, high school was a time of fear and confusion. I was fearful each day and sometimes would tremble with nerves walking to school. I didn’t know what I had done to deserve the abuse I was getting. I hadn’t, to my knowledge, caused any harm or offended anyone. I was just being me. And that was the problem. Growing up, I didn’t have the Safe Schools Coalition, a sentence said by many people in my age bracket. Many of us in our mid-thirties lament that programs like Safe Schools would have made our lives utterly different.” (Gavin, thirties)

While some storytellers have not encountered homophobic abuse directly, they acknowledge that a refusal to talk about what it means to be same sex attracted or gender diverse can be just as damaging.

“My high school was never homophobic from memory, but it was far from accepting. What wasn’t said was sort of the problem. There wasn’t a safe space, there were never discussion about non-heterosexual relationships within the classroom. So by the time I left school I was mostly just ashamed. I knew I was queer and my teenage years felt like a sham.” (Jillian, 27)

Cecilia wanted to reach people who may not have an understanding of LGBTIQ issues and attach faces, names and stories to a reality that involves high rates of mental illness, suicide and trauma.

“To us, the creators, and our small but dedicated team of young adult queers, the Safe Schools program is more than a positive initiative, it’s vital to the lives of young queer individuals from all backgrounds. The stories we have collected and published on our Tumblr, Instagram, Twitter and Facebook are a testament to this fact. Without tailored support, education and positive role models, queer people suffer,” she said.

According to Evers, creating opportunities for intelligent discussion around sexuality and gender identity is key to eliminating discrimination and preventing young people from feeling invisible or marginalised within society.

“Individuals need to understand the challenges specifically faced by young people who identify as LGBTIQ, and to understand the roles they play in being able to influence change. Not fostering open dialogue can be harmful in many ways by breeding myths and false perceptions.”