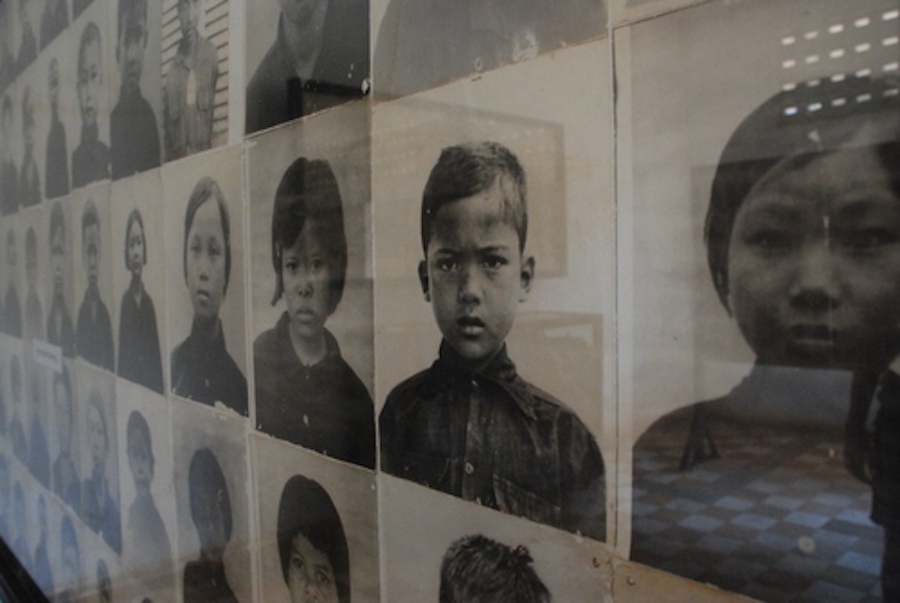 I peer at the wall and see rows and rows of grainy black and white photographs, hundreds of faces staring right back at me. Some look frightened, others defiant; most are remarkable for their apparent lack of emotion, seeming simply unaware of their impending doom.

As I move around the room, it is almost impossible to escape the feeling of being watched by these nameless faces, who are defined only by a number. The people in these photographs could scarcely have understood the magnitude of the historical event they now symbolise; their final days were spent in suffering at the notorious S-21 prison, now the Tuol Sleng Genocide Museum.

I attempt to absorb each individual image, knowing that every face represents a life that was lost and try to resist the numbness of conscience that such repetition brings. As I think about the horrors that these people went through, it becomes more and more difficult to consider each one in turn. These are the forgotten voices of the Cambodian genocide, those that never had the chance to tell their story.

Youk Chhang, Executive Director of the Documentation Centre of Cambodia (DC-Cam), realised just how many Cambodians’ stories were forgotten, overlooked or simply never shared after recently talking to his sister, Kolthida Ekkasak, who was born deaf. Youk admits that, despite always having a close relationship with his sister, he forgot much of his sign language over the years and their efforts at communication began to dwindle. When Kolthida was diagnosed with terminal cancer last December, Youk spent a great deal of time with her.

“As the deaf member of our family, no one bothered to ask her about her experience during the Khmer Rouge period. She was a survivor and while everyone in the family knew how others had fared and their experiences, we never took the time and effort to know her experience. Over thirty-four years after the fall of the Khmer Rouge regime, and I did not even know that my sister was arrested by the Khmer Rouge. It also made me wonder how different her experience was as a deaf person and the indescribable spirit and resourcefulness she must have had to survive. This revelation informs me as much as it saddens me to no end,” he said.

Youk has spent nineteen years recording and preserving the history of the Khmer Rouge regime and the critical need to bring stories, such as his sister’s, to light motivates him to this day. He became DC-Cam’s leader in 1995, after the office of Cambodian Genocide Investigations announced grants to Yale University’s Cambodian Genocide Program (CGP). When the grant expired in 1996, the CGP set up DC-Cam as a field office in Phnom Penh. DC-Cam became an independent non-governmental research institute in 1997 and there are plans to establish a more permanent centre for genocide studies, the Sleuk Rith Institute.

According to Youk, “education is the cornerstone of all transitional justice endeavours.” He believes it makes no sense to organise the trial of criminals if you are not prepared to educate future generations about why what they did was wrong and how to prevent it from ever occurring again.

“We should never rest on our laurels of having ‘buried’ the Khmer Rouge and put the period behind us; if there is anything we should have learned by modern history is that mankind carries the seeds for its destruction as much as it’s evolution, and the line between humanity and inhumanity is far smaller than most people realise in their ordinary lives,” he said.

Despite the importance of Youk’s work, he finds it difficult to get funding for DC-Cam and stories such as his sister’s, which was previously unknown, illustrate the gap between the centre’s efforts and the reality of obtaining justice in a post-conflict society.

In recent times, there has been criticism regarding the disrespectful behaviour of western tourists at sites such as Tuol Sleng and Choeung Ek (killing fields), prompting discussions about whether transforming such culturally sensitives sites into tourist attractions could turn history and suffering into a choreographed spectacle.

Youk thinks this behaviour comes down to a lack of knowledge more than anything else and the best way to address the issue is through patience and education, adding that the history of mass atrocities will always be a spectacle as extreme depravity and evil inherently invites curiosity.

“We should not discourage intellectual curiosity if it facilitates our goal of education and ultimately prevention. What we must discourage is the trivialisation of the human story. This is the ultimate mission of DC-Cam.”