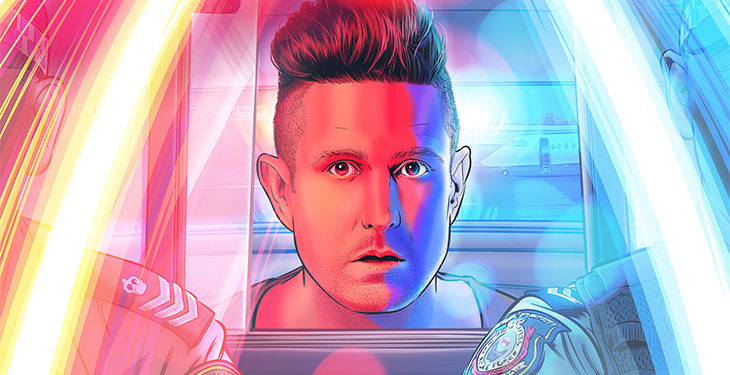 In June 2017, comedian Wil Anderson was arrested as his plane touched down in the regional city of Wagga Wagga. He was alleged to have ‘behaved disruptively’ during the flight, prompting the Qantas crew to notify the police, although it was unclear what he had done to provoke such a reaction. Wilegal, running from 28 March to 22 April at the Melbourne International Comedy Festival (MICF), is the untold story of exactly what happened on that infamous flight.

It’s a full house and the audience are getting excited even before Wil comes on the stage — he is a six time winner of the MICF People’s Choice Award, after all. This would be my first time seeing him live but my plus one assures me that he has enjoyed every single one of Wil’s shows.

Wil is a gifted storyteller, weaving multiple threads and storylines into the broader narrative about finding himself in handcuffs. We acquire small glimpses into what it means to be Wil Anderson, such as his relationship with his two dogs, Ramona and Winona, the difference between his own pets and the ‘working dogs’ on the childhood family farm, his animosity towards vegans who refuse to feed their dogs animal products, and the osteoarthritis he has lived with for more than a decade — a condition that does not take well to long periods of sitting, especially to host a tv show.

The delivery is rapid and unfaltering while Wil barely breaks a sweat. The entire show is laugh-out-loud funny, the audience roaring at every twist and turn. There are few moments when I’m not laughing, the kind of response I think every comedian strives for.

There is one story in particular that stays with us, involving his release from police custody and a celebratory box of KFC chips. His description of the chips (and their ability to induce a chemical high) is so entertaining that there is only one thing we can do when the show ends: go find the only KFC in the city that is open on Good Friday.